The term 'cestrosphendon' often comes up in slinging discussions I've had with the historically-minded or in discussions that I've read on the web. 'Ah yes, that sounds cool,' is a common response to an explanation of your slinging experiences, 'but have you ever tried a cestrosphendon?'

A what? A little research was needed. In fact a little research is all that is required, because there is very little information on this ancient missile weapon. Unlike the sling, the spear, javelin and other staples of ancient warfare, the cestrosphendon (or 'kestrosphendon', or just 'kestros') seems to have had a very short life, being utilised only in the Macedonian war against Sulla's invading legions.

A LITTLE HISTORY
Perseus was the last king of Macedon, a line of monarchs that stretched back to Antigonus One-Eye, Alexander the Great and King Philip. Rome at this time was a republic, and was stretching ever eastwards. Macedon was still a power in the region, a power that had to be dealt with. When I was studying for my Ancient History degree in 1991 I remember writing an essay that compared Roman aggression against Perseus to US aggression against Sadam Hussein (!). Perseus' father, King Philip V had been plotting to dominate Greece with his army, while employing Celtic mercenaries from the Danude area to invade and conquer Italy. His antagonism for Rome was well known. But Philip died and bequethed his antagonism for Rome to his son, Perseus. This young monarch made alliances and friends amongst Greek's poor and dispossessed, while another king, King Eumenes of Pergamon, courted Roman power. Eumenes called on the Romans to destroy Perseus, and when Eumenes was almost assassinated on his way back home, Macedonian factions were blamed. Rome declared war on Perseus in 171 BC. Within three years time 100,000 Roman troops were in Greece. They faced the army of Perseus which was half that size and supported by troops from Illyria, Thrace and Eprius. The Danubian Celts would not fight without money, and Perseus had none left. At the Battle of Pydna (168 BC) the Macedonian army of pikemen and peltasts was defeated by the pilum throwing legions of Sulla. King Perseus died later in a Roman prison.

The cestrosphendone was used by Macedonian troops against the legions. Livy tells us that the weapon was very effective against the armoured Roman soldiers, his words are as follows:

"They suffered (the Romans) mainly from the cestrosphendons, a novel kind of weapon invented during the war. It consisted of a pointed iron head of two palms long, fastened to a shaft made of pinewood, a span in length and as thick as a man´s finger. Round the shaft three feathers were fastened as in the case of arrows, and the sling was held by two scutale, one shorter than the other. When the missile was poised in the center of the sling, the slinger whirled it round with great force and it flew out like a leaden bullet. Many of the soldiers were wounded by these and by missiles of all kinds."
Livy xlii.65.9
THE DART
OK. Palms? Spans? Finger's Breadth? One Thong Shorter Than The Other? What's going on? Wikipedia  provides some numbers to fill in the blanks left by the Greek measuring system:
Looking back at Livy's description, the arrowhead of the weapon (or dart) is 2 palms long (15.8cm) attached to a wooden shaft one span (or 23.7cm) long. The shaft is finger-width in thickness - perhaps 15mm. On the wooden shaft are three flights. So you have a short, chunky arrow roughly 35-40cm long made up of a long iron head and a wooden shaft of more-or-less equal length.

Creating the dart back in 2003 was the easy part. I'd read Livy's description and I'd seen Hondero's (Jesus Vega's) reconstruction on www.slinging.org which seemed to fit the description well. I had an old longbow arrow, a thick warbow arrow with very long fletchings, and I cut that down, and attached some brass tubing of equal length to the tip. The tubing was from a lawn sprinkler I found in my garage (lesson: never throw anything away!), I filled the sprinkler 'holes', attached the tubing to my arrow with 'no nails' cement and then crafted a point by hammering the tip flat then filing the sides to create a nice arrow-head. This was a 'modern' experiment! 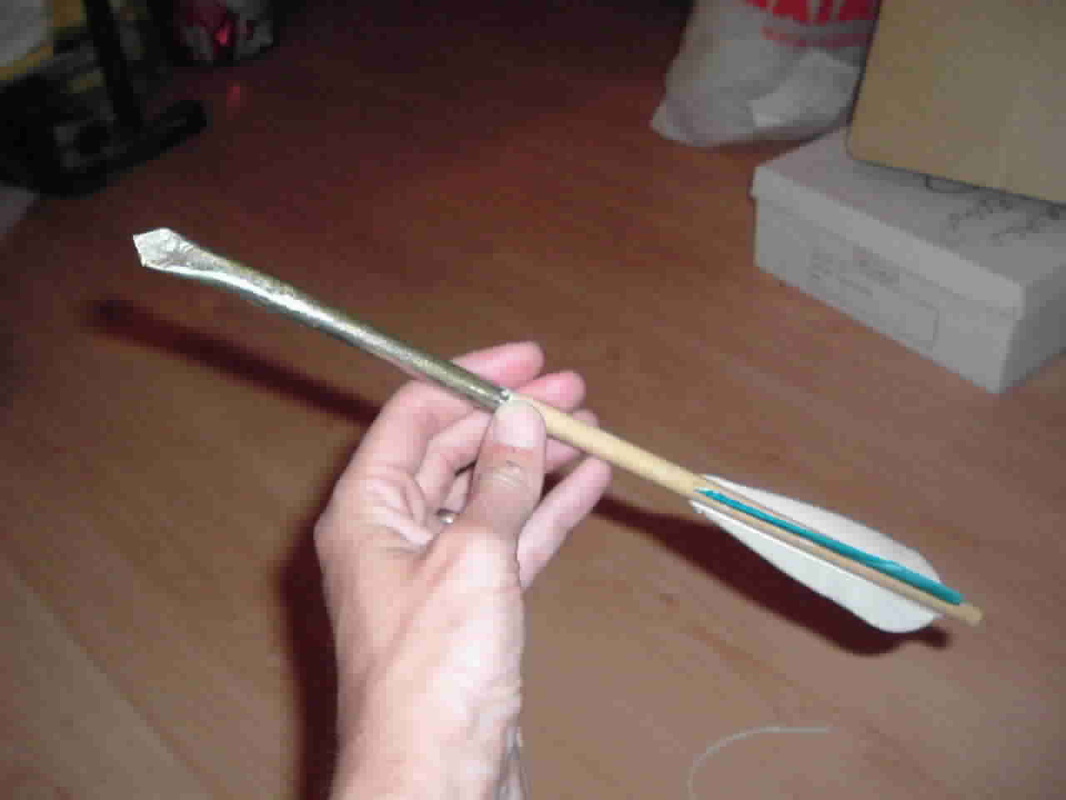 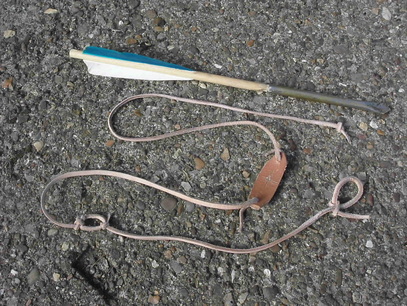 This wonderful painting (below) is by Johnny Shumate and perfectly illustrates the design and appearance of the 'long thong' sling. A retaining loop still hooks over the end of the dart shaft, but the dart head is held only by carefully looping a much longer sling under it and back to the fingers.

I used both types of sling with equally impressive results. My dart was very light, weighing only 55g, and with a single half-body turn I could cast it 40-45m. Both slings allowed my to try this body turn technique as well as an 'over the head' technique and a standard stone slinger's underhand cast. I couldn't get my dart beyond 48m no matter how hard I tried.

The slings did however differ in their reloading times. The pouch sling is 'fiddly' the dart tricky to seat properly and I was never 100% certain that it would stay in the sling up until casting. The long thong sling was more relaible and more importantly was much faster to seat in preparation for a cast, involving only the single action of looping the long thong around the dart shaft just behind the head. 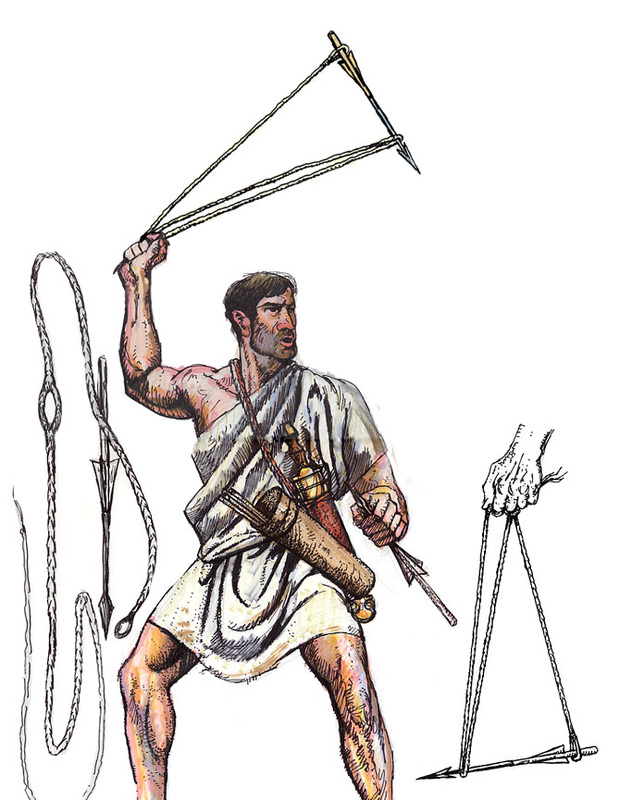 PROBLEMS & OBSERVATIONS
My flight tests have been both enlightening and frustrating. At first, due to the flights and peculiar orientation of the dart in the sling, I only attempted a simple 'round the body' throw. Left hand pointing at the target, legs apart and the dart held away from the body to the rear, I flung it around and up toward the target. I also attempted an 'over the head' cast beginning from the same position. Both casts achieved an upper maximum distance of 40-45m. Because the dart twists in the sling these were the only types of cast I could make, although I have also begun to try out the standard underarm sling technique with some degree of success. I have also increased the weight of my dart in an attempt to increase the range, by pouring molten lead into the head.