To recreate clothing from the north European bronze age, I only had recourse to the mound burials of Denmark, particularly the Muldbjerg, Trindhøj and Borum Eshøj burials of menfolk. He clothing there is spectacularly preserved, and remains the only available bronze age clothing of any size or completeness.

The Trindhøj Man
The Trindhøj clothing is typical, and features a brown woollen rectangle wrapped around the body and under the arms. It was fastened with one or more shoulder straps, though the straps, or stitching have not survived. Round the waist a belt of fabric.  A tall woollen hat and footwear made up of cloth wraps, with cloth bindings. Over the shoulders a woollen cape of a kidney or semi-circular shape, un-fastened, although bronze fibula were found in the grave, and a bone pin fastened the cape of the old man of Borum Eshøj.

These were wealthy men their garb immediately strikes me as impractical for everday work.  A cape that falls off the shoulders when you raise your arms, footwear that gets soggy anf falls off after half an hour in the wet fields, and an off-the shoulder wrap more suited to summer pastures than to the cold British or Danish climate.

What to do? I want something fairly representative of a high status male, but a male who travels, works and is equipped for the cold. 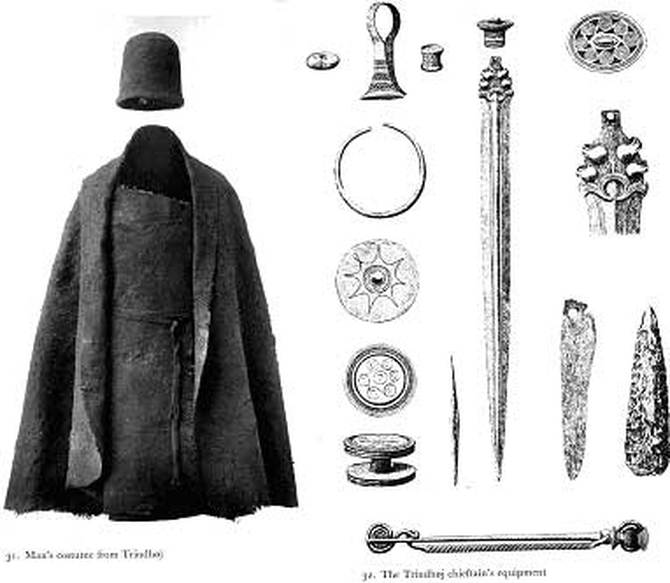 Working Around the Danish Finds
I wanted a more traditional tunic, with short sleeves, mainly for my own selfish benefit and comfort I suppose, I will produce a body-wrap, but for this initial experiment I made up a –shaped tunic of coarse brown wool. The women certainly wore long sleeved tops, the concept was part of the culture – and not alien. My cape was made of brown wool of a finer quality, and held with a bone pin as with the old man of Borum Eshøj. My pin is a copy of one found in Derbyshire, England. My belt is leather not fabric, this is to utilise the bone belt ring that has been found in several bronze age burials here in Britain.

I want leg-coverings, and produced grey woollen versions of the Ice Man Otzi’s goat-skin hose. It is winter here, after all… his attire is north Italian from the 4th millennia BC, not the 3rd. or the photos here, I realised they looked like trousers and I doubled them over instead to create impromptu leg-wraps.  A time-honoured and expedient method of covering the legs in winter, or in rough country. Unless I can find something to corroborate leg wraps, I will probably return to the Otzi hose, which hangs from my linen loin cloth.

Footwear
Why these folk were wearing textile footwraps instead of leather on their feet baffles me, Otzi wore adequate leather shoes filled with dry grass, the knowledge was there in Europe at least millennium earlier. I can only think it was high status wear – I can’t imagine walking 20 miles across country with woollen cloth wrapped around my feet.

“In the course of time the basic form of the one piece shoe changes, becoming a little more complicated. The oldest form is an oval with slits around the margin. The shoe was bound around the instep by a leather string threaded through the slits. Impressions in the leather point to an additional binding around the foot . This form is seen in shoes dating from the Neolithic and Early to Middle Bronze Age.”(Groenman-van Waateringe, Willy 2001)

I plan to make Schindejoch shoes, reminiscent of a version of the simple Drumacoon ‘bag shoe’ that was found in Irish peat bogs dating to the early Medieval period. The form is found in the Netherlands (I believe) in prehistory. It also resembles the ‘pampootie’ and traditional skin shoe with fur left on the outside, from the west coast of Ireland. Photos of these are at the bottom of the page.