"Dave Chapman offers a unique opportunity to make and take home your own bronze sword. The workshop will include the casting of the sword, cleaning, finishing, sharpening and then hilting the finished blade."

On the 8th of February 2003 I headed back to Flag Fen for the Sword Casting course that we had discussed back in 2002. Unlike the dark and quiet roundhouse that we'd been greeted with on the Lost Wax course, this morning the roundhouse was full of light, fire and noise. Because we needed light to use some of the powertools this time around, a spot light had been set up. And because we were casting first thing Saturday morning instead of Sunday, the furnace was glowing bright orange, the blue gas flame roaring into a hole in the base. Copper and tin already sat in the crucible, and the melting copper formed a huge cool flame of emerald green that shot out of the top of the furnace. Impressive stuff! 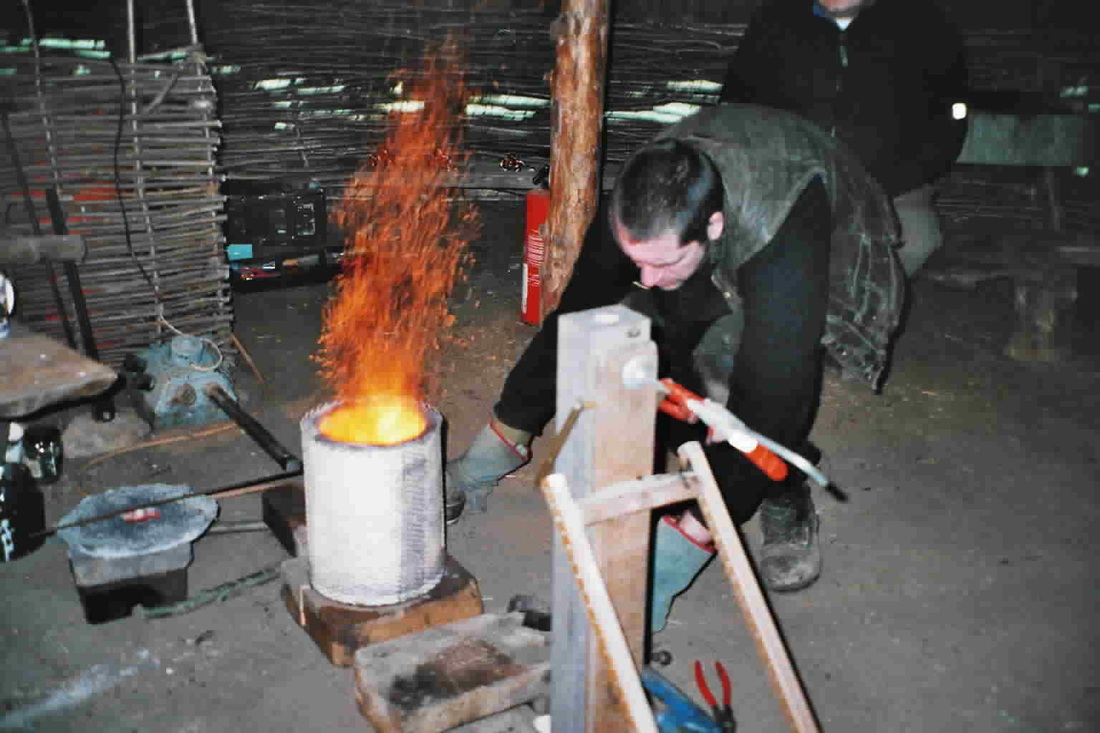 There were six guys on the course today (including one woman) and Dave speedily got down to the business of casting. Anything long and thin is a liability when cast using lost wax, the packing of the mould can easily distort the wax model, and the mould does not replicate the smooth finish too well. Instead bronze or stone moulds were and are used. Dave has carved his own stone mould that he uses to cast his swords, and the sword used is a near perfect replica of a bronze age find in the Pitt-Rivers collection. The mould took him a couple of painstaking weeks to create, and is a beautiful piece of craftmanship. Dave had warmed through the mould for a few hours.
The two halves of the stone mould are clamped together, upright, in a wooden rig. Dave pours in the molten bronze and then unfastens the clamps to pull out the newly-created sword with pliers. It is still ferociously hot and needs quenching in the mere just outside the roundhouse. One after another Dave melted down copper and tin and poured the melt. By 12:30 we all had a blade to work on. 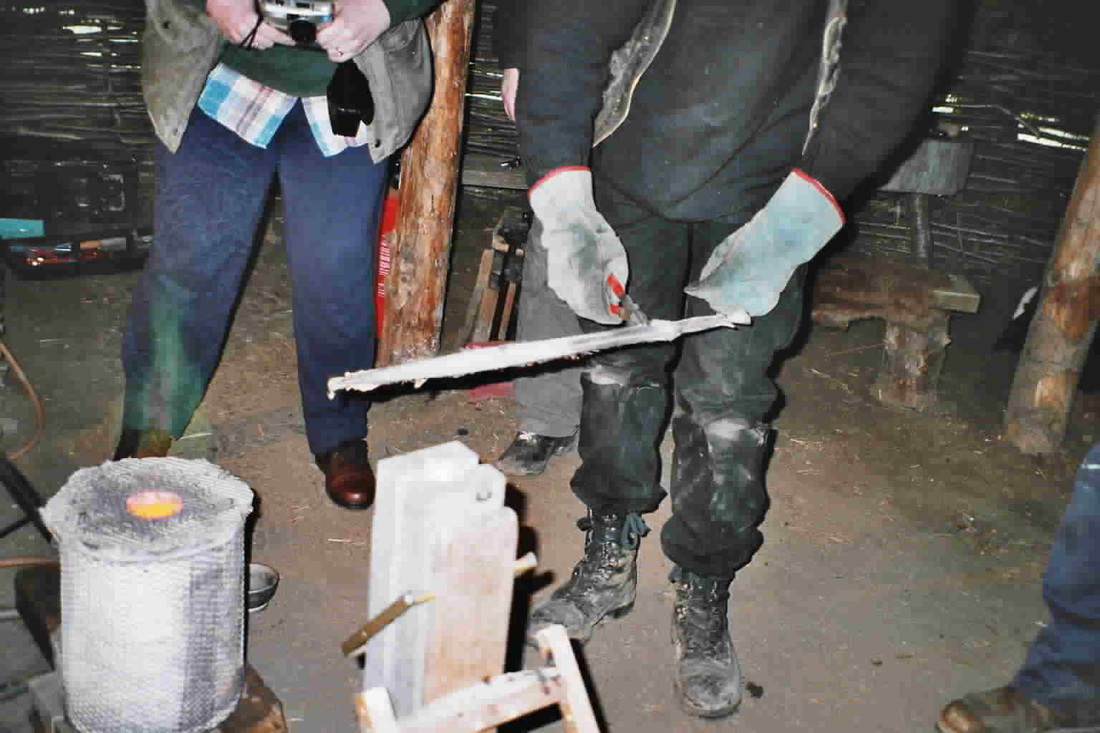 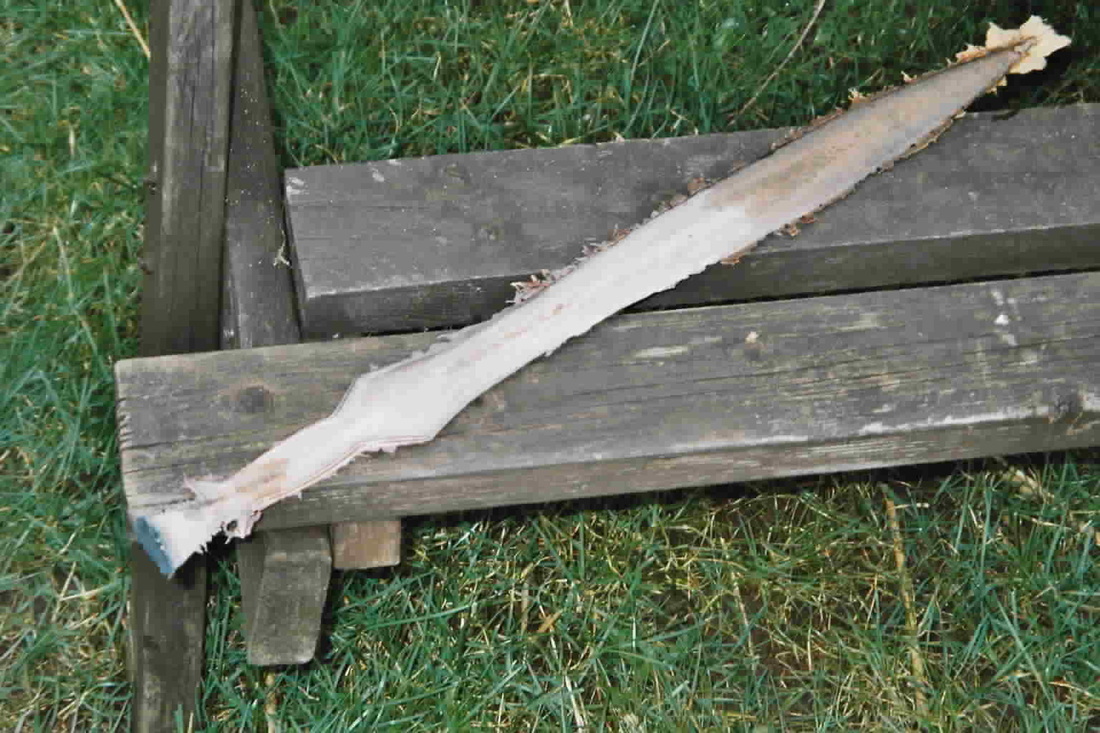 Firstly, though, the little cone of bronze sitting on the hilt (that acted as a channel and allowed the melt to be poured into the mould) had to be hacksawed off.

Then began the long process of gently filing the blade surface, staying away from the edges, and not digging too deeply. From file we went to coarse sand-paper and then to fine, on Sunday we moved on to wire wool for a mirror-like lustre. Great! Halfway through this process the blade edge was finished-off with an angle-grinder. Now it was sharp!
The wood burned and contracted away to leave a fine imprint that Mick jigsawed away. After Dave drilled holes through wooden handles and sword tang, we had something to work with. The wooden handles were still flat, uninspired chunky and unattractive lumps of wood temporarily screwed to our sword.

For most of Sunday we worked feverishly on the handles. This was my first time with woodwork (apart from a wooden spoon at school and my attempts at hafting my axe and dagger). We worked to create handles that looked like the ones on Dave's show sword, beautifully stained and looking cool. We rasped and filed, rasped and filed, rounding the handles, creating 'waists' at pommel and blade end. By dinnertime on Sunday we had our handles rounded and looking neat. Just time now to attach them to the tang. 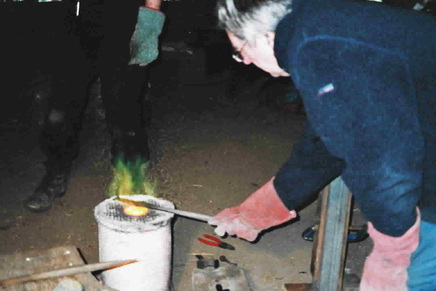 Dave had a thick copper wire that he had heated, and then cut to rivet size. We each had six of these copper rivets. Attaching the handles proved a little traumatic for some of us. Remember that where-ever possible we do everything ourselves, with Dave watching on, giving advice and showing us how it's done. In preparation for the rivets I used a drill to ream out the holes. Then I inserted a rivet, tapped it in with a hammer, then tapped harder on first one side then the other. The soft copper bulges out and sticks in position, with only a little sticking out at either end. Some people found that tapping with the hammer broke away pieces of that lovingly-shaped handle. Horror! Wood-glue was the only answer. Luckily I got away Scott-free, and breathed a sigh of relief. Next the tips of the rivets needed to be hacksawed off. Tricky! One of the guys called Kent held the sword in place as I moved around trying to find a way to get at the rivets without cutting into my smooth handle. I couldn't help but dig in a little, but nothing a little sanding couldn't cure. 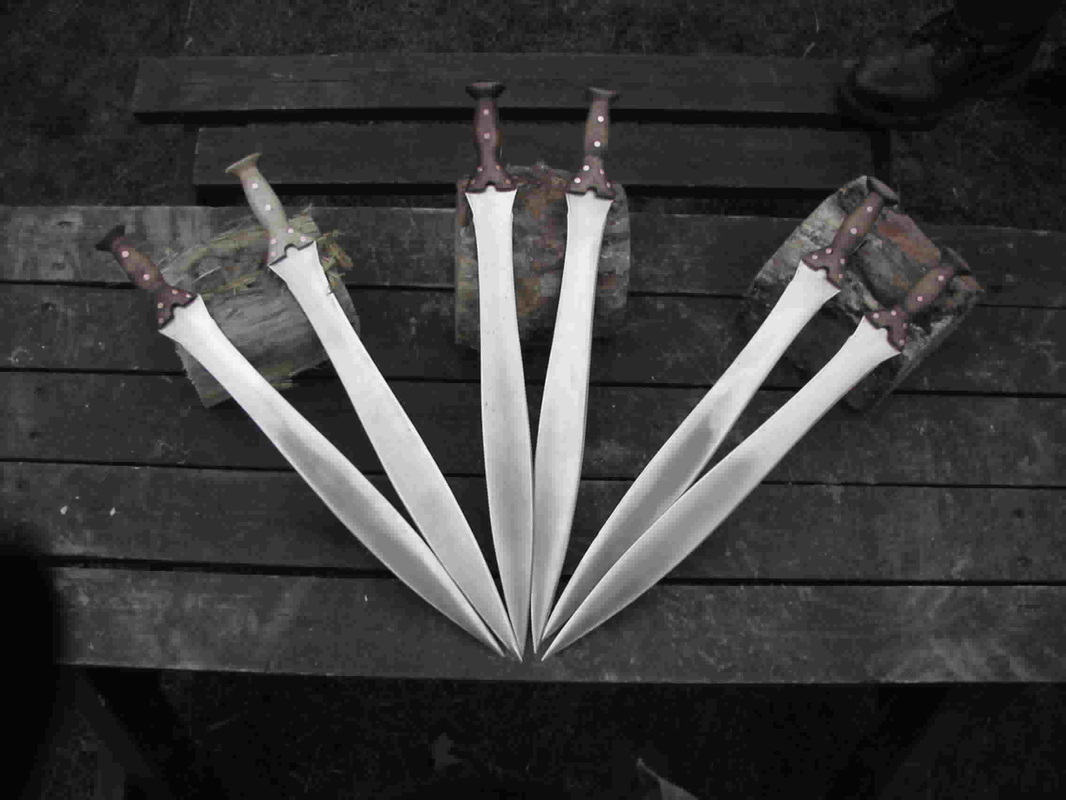 Shazam. Bronze age sword. To finish we had to 'draw-file' the blade, bringing it up to a symmetrical and clean finish, and then stain the handle dark brown. A coat of varnish would preserve the colour.

When we compared our swords to Dave's original, we were mightly impressed. I don't think any of us actually thought our finished weapon would look quite so much like his. But they did. Everyone had a sword they could be proud of. We had worked hard (and the weather was not kind - we were damn freezing!) and after some hasty goodbyes and waving of swords around, dashed away.

The sword casting proved as fulfilling as the lost wax, but in a different way. We had less real input with the bronze because Dave had a mould ready (we didn't make a wax model and create our own mould). But the result was spectacular! With the lost wax I felt like I had created something from nothing, but what I created was only half as exciting as a damn sword! 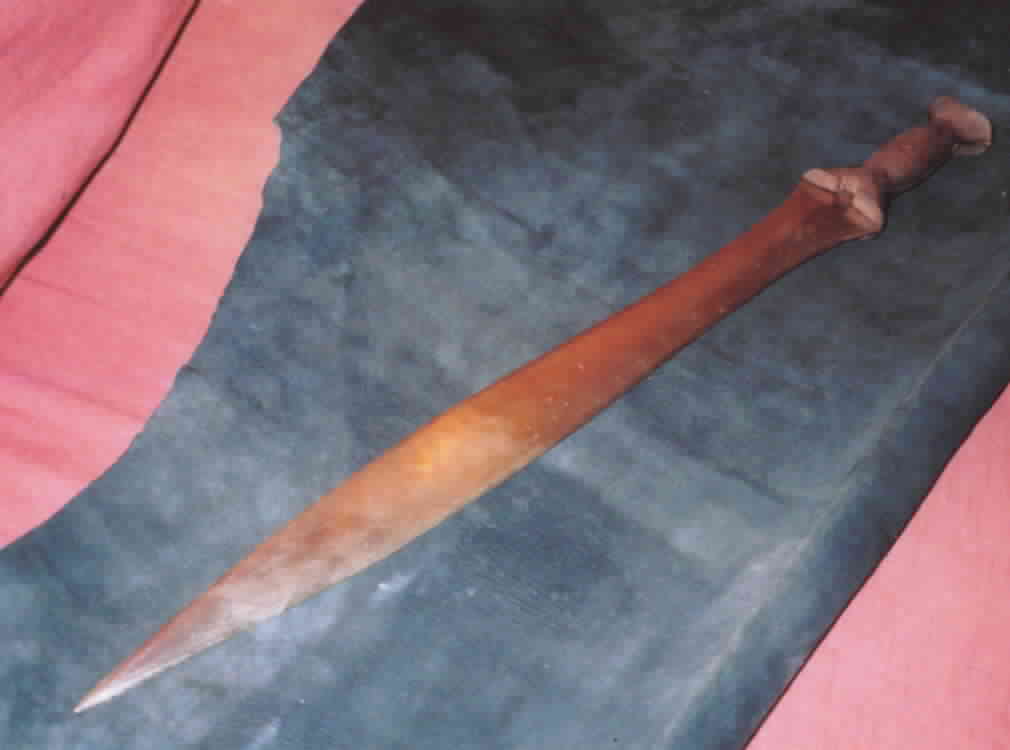