Literary Sources
The Codex Theodosius (7.4.11) dating from 360 states that troops on the move should receive hardtack biscuits (buccellatum), bread, ordinary wine (vinum) and sour wine (acetum), salted pork and mutton. It seems that hardtack and acetum would be consumed for two days, and on the third day the decent wine and bread would be eaten. Troops were ordered to collect twenty days rations from the state warehouses before a long campaign, and carry these rations themselves.

We have other sources which tell us how bleak the marching diet was. Vegetius remarks that soldiers should have "corn (ie. wheat), wine, vinegar and salt at all times". That wheat ration will have come as hardtack biscuits. The Emperor Hadrian lived the life of a regular soldier for a while (SHA, Hadrian X, 2) and enjoyed "larido, caseo et posca", which was bacon fat, cheese and sour wine (also called acetum). Ammianus (xvii) also mentions buccellatum. Avidius Cassius, a general who rebelled against Marcus Aurelius, ordered his troops to carry nothing except "laridum ac buccellatum at que acetum", ie. bacon fat, hardtack and sour wine (Avidius Cassius, v, 3).
Creating A Menu
What kind of a menu can I create, then? Obviously, buccellatum (hardtack or wheat biscuits) will feature quite highly, as will bacon and lard. Using just those ingredients Northern troops in the American Civil War concocted "skilleegalee", hardtack crumbled into bacon and hot lard. I've tried this for breakfast at events, and it does the job just fine. Buccellatum can also be fried as they come, or soaked in water till mushy and fried or put in the pot with other ingredients. Remember that hardtack is a way to preserve the wheat ration. It is essential. Wheat or barley could be carried, but would need to be ground before use, using portable millstones carried by the conterburnium's mule. Flour can be carried on its own. It is much more prone to damp and spoilage than wheat grains, but mixed with water and lard and slapped onto a flat stone warming next to the fire (or onto a frying pan) an unleavened bread can be cooked in minutes. Bread is always the major food source; flour or hardtack are essential for the legionary's survival.

We know that the Romans loved smoked cheese - and so that might be on the soldier's marching menu (in fact Hadrian explicitly says so). What about boiled eggs? A few apples? Some vegetables (leek, onion, radish, celery, cabbage, parsnip, carrot - take your pick). For a short patrol, how about a slice of beef or pork, perhaps a few lamb chops or chicken drumsticks?Of course the big factor here is, how far are you going? For a two day hike your wife in the fort (if you are limitanei) can pack left-overs to fill your belly. For a week or two on the frontier or beyond, or a march to the Channel to cross for a campaign in Gaul, all your rations are going to be dried, salted or smoked. My aim, then, is to try both types of rations, probably eating hardtack and bacon for breakfast (bacon butties anyone?), and using fresh food for a meal in the evening. Remember that armies were always feared for their locust-like tendency to take whatever they liked from farms and towns that they passed through.

Posca
Sour wine has proved to be a problem. Initially I used lots of red-wine vinegar mixed with red wine to create this (supposedly) refreshing and ubiquitous legionary drink. But the end result was oily, burning, cloying and nauseating. Several attempts later I settled on a drink of water, with a dash of red wine vinegar, and a dash of red wine (vinum) added. On a two day march along Hadrian's Wall, over-heating, desperate for refreshment, this mix was refreshing. I drank the lot. The New Testament records how an auxiliary soldier soaks a sponge in posca and lifts it up to Jesus on the Cross to drink from. Some modern readers think it yet another example of Roman cruelty, but, on reflection, he was sharing his ration of posca!!

The Fire
Cooking on an open wood fire presents problems for the re-enactor in the UK. In the garden I can cook on a large concrete slab, or on a Roman cooking range-cum-barbeque I've made. At re-enactment events, where fires have to be off the ground (due to the fact we often camp at important archaeological sites, such as forts and castles) I had to come up with another option. I can't use a firebase (raised iron or wooden box lined with sand) or an iron tripod arrangement, because none of these would be available to a legionary on the march. What would? Well ... there is a fire-building technique which creates an 'altar-fire', a raised wood fire that is easier on the camper for cooking on. I reckoned this might be a safe bet for a legionary. Since the altar-fire leaves no burning on the ground it might also be useful for a Roman patrol trying to remain hidden from enemy trackers.

The altar-fire is simply lengths of greenwood stacked alternately to create an empty 'box' construction. On top is spread a layer of soil, and the fire started on that. The biggest problem is taking it apart without spilling ashes on the grass, I've tried catching those ashes with a cloth, but it is a tricky manoeuvre. An alternative to the fire-altar might be a simple slab of stone, raised up off the grass so that the heat is not conducted through it to burn the grass below. I'll have to haul a suitable stone off the beach this weekend and try cooking on that.
The Marching Menu In Practice
On 14 October 2005 I participated in a two-day march along the most rugged stretch of Hadrian's Wall with several other members of another Late Roman group. This included two nights at a temporary marching camp. The experience gave me the opportunity to try out some of the foods I have talked about here. Our menu comprised of: pork chops and apple for Friday night, with fresh onion bread. I had planned a cold breakfast of bread and smoked cheese to enable us to strike camp quickly. After the ten-mile march along tough terrain, we had to pitch camp once again, light a fire with flint and tinder and cook our tea. One member did well, cooking smoked sausage with bacon and garlic and lentils, all foods that had a much longer life than fresh food - perfect marching fare. I cooked flat bread as an accompaniment, but in the dark couldn't tell whether it was cooked or not, and burnt the stuff! Next morning I had planned hardtack and bacon, but we ate a cold breakfast of bread and cheese once again. During the march I ate only dried figs (high in sugar and energy) and home-made beef jerky (that had been marinated in honey and Worcester Sauce). For lunch I could barely stomach a little smoked cheese and bread.

The march taught me some valuable lessons about camping on the march during the Roman period.

· Cooking in the dark is difficult
· Shields make great combined seats/food preparation areas
· No-one wants to bother cooking in the morning if the camp is to be struck - cold breakfast for everyone!
· Don't carry too much food 'to eat' on the march. Concentrate on liquids (water or posca) and keep some bread or dried fruit or nuts handy.
· Always having cold food ready to eat is great if the fire isn't lit or you are stuck for time. Bread, boiled eggs, fruit, cheese are all wonderful backups if a camp meal is spoiled.
· Heavy iron fire grills aren't necessary, just use logs either side of the fire to balance pots or pans on, or improvise a hanging stick.
· Have firewood ready by the fire before it gets dark, once its gone firewood is difficult and dangerous to chop in the dark.

Mix the ingredients together into a stiff batter, adding extra water or flour as needed. Knead several times, and spread the dough out flat to a thickness of  1cm. Cut the dough into squares (around 5-6cm square), and punch four rows of holes all the way into the dough .. Bake on a non-greased baking tray for one hour at around 180 degrees. Keep testing the hardtack, it must be lightly browned and rock hard. Extend the cooking time if still not hard, reduce the temperature if the hardtack is browning too quickly. When hard allow to cool in the oven.

Carry a dozen or more in a linen bag for the campaigning season. Keep dry, or you will have maggots in your bread! To eat soak in water, or crumble into fried bacon (larido et buccelatum), or crush up into powder and use as a flour ration in stews or to make pulmentum (below) or unleavened bread on a hot stone. Or just fry it up in lard or olive oil!

Cook the pork steaks in a  frying pan until cooked with lard, and then set aside. Core the apples and then slice into thin rings (don't bother peeling them!), slice onion into thin rings also, fry in the lard and pork fat until brown, When ready pour over the pork. Sweet and delicious. SErve with bread. This should be an easy dish to prepare in the field.

Beef was a popular meat within legionary forts. This recipe is a Roman twist on a traditional jerky recipe from the US, allowing troops to carry beef rations into the field with them.

Use steak without any fat. Partially freeze the steak, then slice thinly (but not so thin the meat will cook instead of dry!). Pieces can be around 10cm long and 3 or 4cm wide. Dump the lot in a sieve then plunge into boiling water for a minute or two until the meat has changed colour. Dry the pieces on a kitchen towel then season. Seasoning should be salty and spicy, I suggest replicating Roman garum, the soldier's favourite! Mix 1 tblspoon of Blue Dragon Nam Pla (or Worcester Sauce, which is a delicious alternative!) with a teaspoon of honey. In a bowl marinate the beef in the sauce for half an hour, then wipe off all excess sauce.

Skewer the strips of marinated steak on barbeque skewers and place on a rack in the oven, let the meat hang freely, keep it all well spaced. Place a drip tray in the oven. Now dry, not cook, the meat by putting the over on its lowest setting for several hours. Leave the oven door ajar to allow steam to escape. Remove the meat when it is dry and leathery.

Make a dough by adding the salt to the flour and enough water to create a bread dough, but not too sticky. Knead a little, then use your fingers to squash the dough into a 'pitta bread' shape and thickness (maximum ½ cm). Stick on a very hot pan (don't use oil or lard, but dust the pan with flour instead), and turn halfway through cooking. Instant unleavened bread!

The gruel of the plebs, soldiers hated it, but must have consumed it in quantity. Dump the flour in the mixing bowl and add the salt. Add water at a trickle, mixing briskly with pointy finger to get a soupy consistency, switch to a fork and, adding water, whisk the mixture to eliminate lumps. You do NOT want lumps in your pulmentum, believe me! When ready, pour into a hot pan on the stove or fire and continue to stir, add extra water if needed and try to produce a wheat-grain 'porridge'. Pulmentum is not easy to eat, but a nice dose of salt and a good, rich, tasty wholemeal flour will make it more palatable. Forget dormice and snails in milk. Most Romans ate this dish. My first batch was nauseating, but my second was very nice due to a delicious flour mix! 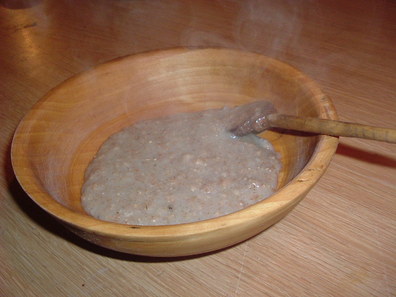