Now I'm no metal worker or smith, but once I get a burning question inside my head, I need to find some way to answer it. One question was 'are there any Late Roman tents in the record - can I make one?'; but currently the question has been, 'did Late Roman ridge helmets have crests? And if so, how were they attached?'

To my mind the Late Roman soldier doesn't look particularly Roman, with ridge helm, lancea and oval shield. I wanted to rectifty this if possible, and when I heard about an Intercisa ridge helm in the Roman Museum at Mainz/Germany, I thought I'd found the perfect candidate. Unfortunately I do not have a photo of the original. It resembles a standard Intercisa in every way, except that it boasts two slits in the central ridge, each 2 or 3 cm long, one is close to the crown, the other is a little further back. Robert Vermaat created an interpretation of how the crest may have looked (see below).

Did I go for horsehair or feathers? Since this was my first crest - being a Late Roman we don't come across them very often - I opted for a feather crest and was able to procure 35 crow feathers of assorted lengths. I didn't think that the number of feathers I had would justify a large crest. To that end I decided to opt for a single 'slit' in my helmet rather than two.

I used an off-the shelf Deepeeka Intercisa. I used an angle-grinder to cut the hole, and I enlarged it using files. I carved a crest box, and carving out a deep slot in its underside, inserted a rectangle of soft iron that would drop inside the slit ontop of my helm. It fitted beautifully. By cutting this rectangular plate into three strips, I could bend the strips that stuck into the helmet back, and they would hold the crest box firmly.

Now all I needed to do was drill the holes into the crest box and attach my feathers. I post a picture below, but I have since added feathers, especially to the front - and the crest is much deeper and thicker and points forward as well as back.

It certainly looks Roman, and when a member of the public challenges me, I can refer them back to the Mainz museum find with a clear consceince and be content in the knowledge that someone, somewhere in the 4thC had a crest like mine on their ridge helm!

My replica uses the slot attachment, and crow feathers in lieu of horsehair. Photos of the procedure are included below.

Above: Various interpretations of the Mainz attachment (copyright Robert Vermaat) 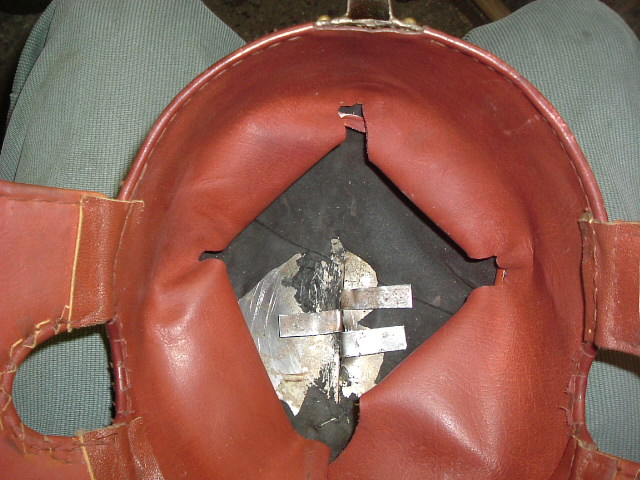