The preferred ammunition of a military slinger was almost always a lead bullet (Latin: glans, pl. glandes). Denser than a stone of the same dimensions, a lead glans is capable of being thrown at higher velocities and to much greater distances. Casting beach pebbles, one is quickly struck by the diverse weights and shapes of pebbles which change the way in which they fly, and where they land! Lead bullets were cast by Roman slingers [Latin: funditores] to create a 'given' sling bullet that could be used with confidence. Only with identical ammunition can a slinger begin to hone his aim.

My attempts to create lead sling bullets have been mixed, but the experiment is still on-going and there is plenty more to learn. Since I've had some experience of using the lost wax process to cast in bronze, I decided to follow the same procedure in casting lead. I carefully moulded three glans in beeswax, trying to follow the shape I could see in illustrations of museum exhibits. Once moulded to a satisfactory shape (and dipped in cold water to harden them) I encased the three wax models between two rectangular slabs of clay. I kept the wax models upright with one end of each model very close to the edge of the clay. Next I carved three funnel-shaped channels into the clay to meet the wax. models. These channels would allow the wax to drain away and, later, when the clay was baked, the liquid lead to flow into the cavity the models had left behind.
To get at the moulds, I took a hacksaw and cut the mould in half right through the midline of the sling bullets. Of course there was now just a cavity there where the wax model had been. On a couple of the interior faces I carved some appropriate Roman inscription. On one 'LEG IV' and on the other a copy of that antique's site glans that featured Jupiter's thunderbolts (the traditional Roman shield design).

Everything set, I now put the two halves of the mould together and tied them tightly. I propped them up next to my stove and began to melt my lead in a tin cup. After 5 minutes the lead turned to liquid and I poured in the lead. I'd created a lip on the tin cup to facilitate the pouring - I knew I wouldn't have long to carry out this delicate proceedure. As it was, my first casting was disasterous. Lead leaked sideways from one hollowed out space into the next and I ran out of molten lead. I untied the fastenings, opened up the mould and pulled out the tangle of mishapen lead to remelt. As it was heating up once again, I took a little wet clay and filled in the spaces I could see. I also added some more lead to the tin cup.

This second casting was perfect, but the mould didn't survive the process and broke to pieces as I pulled out my freshly cooled Roman glandes. A few weeks later I decided to try some more casting. I'd purchased a number of authentic Roman glandes found at a Roman site and this time I used these to impress hollows in the clay (rather than use beeswax models). This eliminated one of the processes and also added a touch of authenticity to my castings. The castings went very well and I created some perfect Roman replicas. I also tried 'sand-casting', a technique that Paul Carrick had tried at Quinta. This replicated 'ad hoc' glandes casting, using thumbs or spear ferrules in wet sand. Glandes like this have been found in archaeological contexts and probably represent emergency castings of sling bullets. They proved easy to cast and at Heron Corn Mill seemed to
substantially fly further than ground-scavenged pebbles. 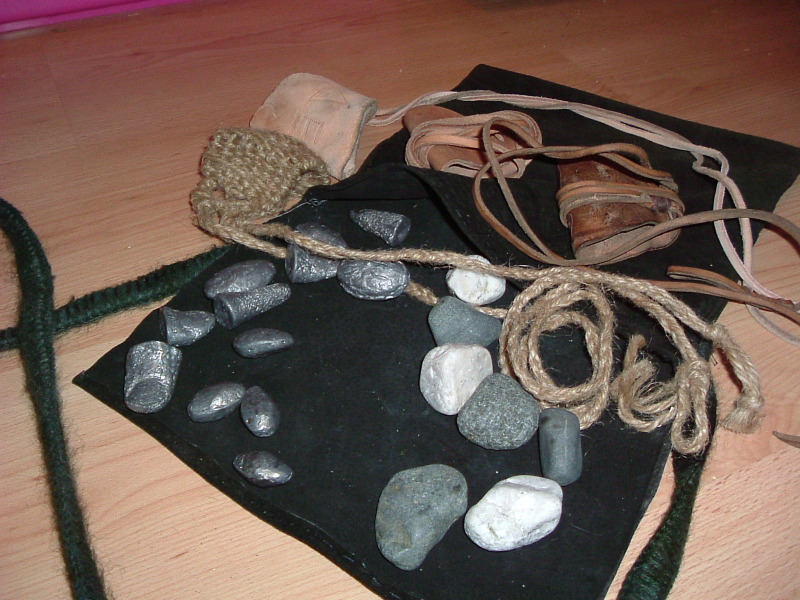